By its very nature, the process of good science requires composure and objectivity.  How hard it must have been for the authors of a study recently published in PLOS ONE to maintain a sense of detachment while collecting, analyzing, and discussing the data that documents a slaughter.  The conclusions of this remarkably thorough study are clear – poaching by humans is wreaking havoc on populations of wild elephants.

Conducted over 14 years in the Samburu National Reserve in Kenya, the authors demonstrate that the killing of elephants is escalating dramatically.  In 2011, humans were directly responsible for 56% of the recorded mortality.  In other words, poaching by humans is the leading cause of death for elephants in this population.

As a result, the life expectancies of the elephants in Samburu was dramatically reduced when compared with the less impacted Amboseli National Park, also in Kenya.  In Samburu, females were expected to live half as long, and males only one quarter as long as their counterparts in Amboseli.

As stated by the authors, “Unfortunately, illegal killing and related population decline is increasingly common across Africa, therefore the results from this study are directly relevant to understanding the conservation status of the species.”

The evidence is clear – the “blood ivory” trade is rapidly pushing African elephants towards extinction.

In a moving tribute, Oria Douglas Hamilton remembered Changila, one of the last bull elephants in Samburu who was recently killed for his ivory tusks.

After decades of advocacy on behalf of elephants, she makes it clear that the trade in “blood ivory” must stop.  Her pleas for action are clear and direct – Kenyan and Chinese authorities must end the buying and selling of ivory.  China must close the businesses that support this ongoing tragedy.

Despite the continued killings and apparent indifference by those political leaders who could work to end the slaughter, there are signs of progress.  New voices are joining those who call for an end to “blood ivory”, and the chorus is growing stronger.

In October 2012, the National Geographic published a cover story that chronicled the trail of “blood ivory” around the world (see blog posting on the topic below). 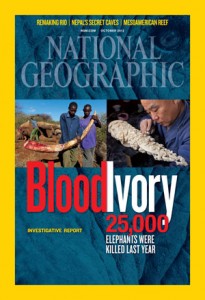 A particularly disturbing aspect of the story was the documentation of ivory being fashioned into modern day objects of religious devotion – particularly in some populations of the Catholic Church.  After thoughtful consideration, the Vatican has publicly responded.

In the statement, Father Federico Lombardi, director of the Vatican press office states that “…we are absolutely convinced that the massacre of elephants is a very serious matter, against which it is right that everyone who can do something should be committed. For our part, we can certainly undertake a program of information and empowerment through some “Vatican” organizations.”

The three initiatives underway by the Church involve:

1. Bringing the issue to the attention of the Pontifical Council for Justice and Peace

2. Raising awareness of the ivory trade through programming on Vatican Radio, particularly in range countries for elephants

3. Widely publicizing research by the Pontifical Academy of Sciences on environmental issues and biodiversity

These are important and meaningful steps, spurred by the awareness that was created from excellent journalism.  Good people are doing important work on behalf of elephants.  But, more must be done.